From the Government Accountability Office:

The public comment process: Agencies engage in three basic phases during the rulemaking process under the Administrative Procedure Act (APA): 1) they process comments submitted by the public, which may include identifying duplicate comments, 2) analyze and consider all relevant and substantive comments, and 3) identify, as appropriate, rule revisions that may be made in response to the comments submitted. GAO surveyed 52 program offices at 10 federal agencies that received a high volume of public comments between January 1, 2013, and December 31, 2017. Almost all of the surveyed program offices responded that the public comment process resulted in at least some substantive changes to their final rules. The program offices also shared views on the importance of the public comment elements to their agency (see figure).

Figure:Selected Agencies’ Views on the Importance of the Public Comment Process from 2013 through 2017 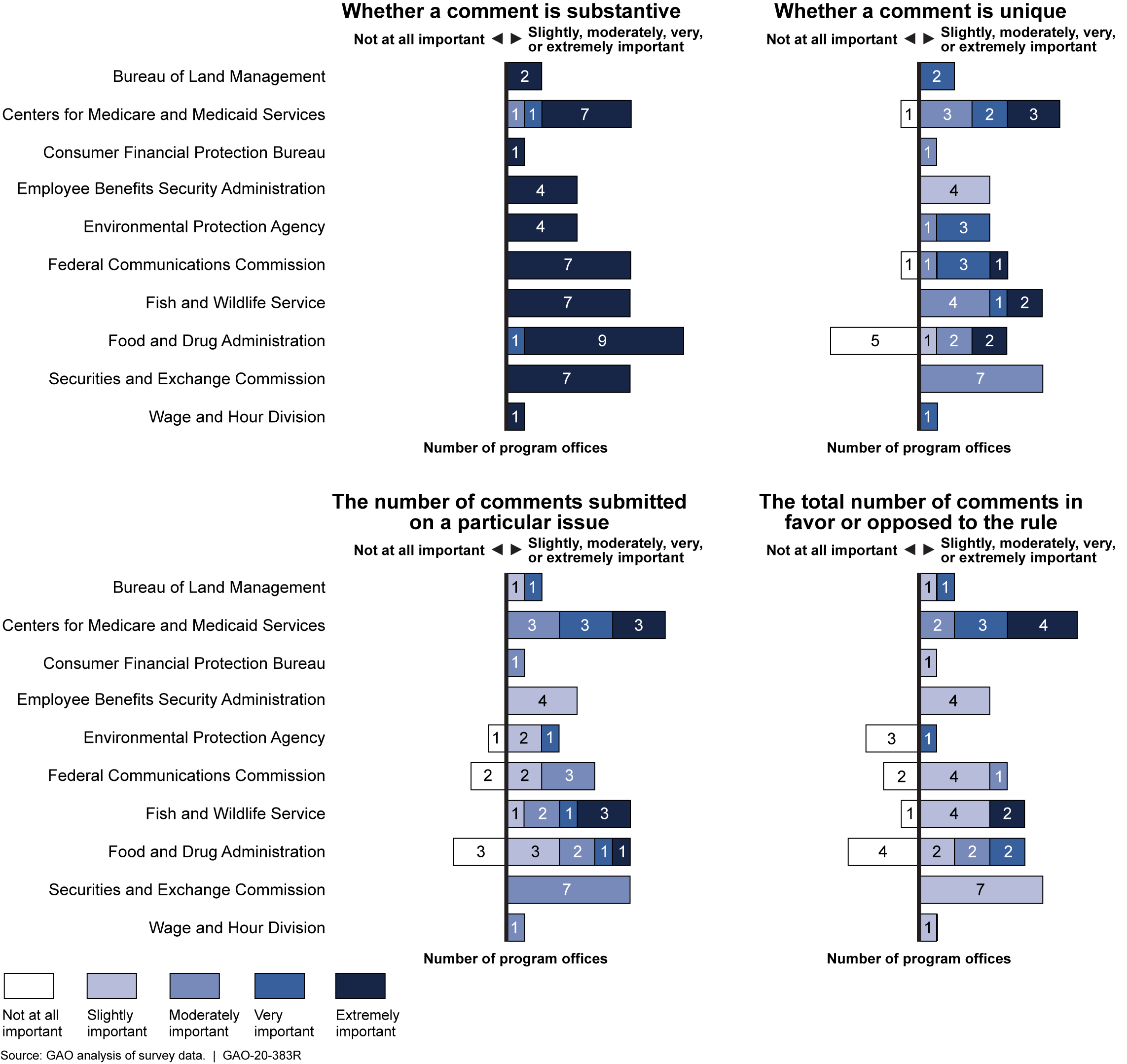 Views of selected subject matter experts and user groups on the transparency and usability of selected agencies’ electronic comment platforms:

The Administrative Conference of the United States Subject matter experts has raised concerns about challenges that members of the public interested in participating in the rulemaking process may have when interfacing with Regulations.gov, including the inability to reliably search and find rulemaking materials. Officials from the General Services Administration, where Regulations.gov is housed, said they are in the process of upgrading Regulations.gov, in part to improve the usability of the platform.

Users groups of agency-specific electronic comment platforms—the Federal Communications Commission’s (FCC) Electronic Comment Filing System (ECFS) and the Security and Exchange Commission’s (SEC) rulemaking website—generally found these platforms easy to access and use for submitting comments on rules. However, they identified some challenges that impede usability. For example, ECFS users reported difficulties using the platform’s search function, and users of SEC’s website reported challenges finding relevant rulemaking materials and tracking them over the full lifecycle of a rule because rulemaking materials are not consistently linked to each other. FCC is in the process of updating ECFS and is soliciting feedback from public users during this process, and SEC developed a mechanism in 2015 to help address some of the challenges users identified.

Why GAO Did This Study

Every year, federal agencies publish thousands of rules affecting various aspects of everyday life. To ensure the public has an opportunity to participate in the rulemaking process, agencies are generally required to notify the public about, and solicit comments on, proposed regulations. In addition, to the extent practicable, they are required to ensure there is a website the public can use to comment on the numerous proposed regulations that affect them. GAO was asked to review the means by which federal agencies receive comments on proposed rulemakings. This report provides information on (1) the public comment process at selected agencies and (2) subject matter expert and user groups’ views on the transparency and usability of selected agencies’ selected electronic comment platforms for receiving public comments.