From the National Archives:

In 1965, at the height of the modern civil rights movement, activists organized a march for voting rights, from Selma, Alabama, to Montgomery, the state capital. On March 7, some 600 people assembled at a downtown church, knelt briefly in prayer, and began walking silently, two-by-two through the city streets.

With Hosea Williams of the Southern Christian Leadership Conference (SCLC) leading the demonstration, and John Lewis, Chairman of the Student Nonviolent Coordinating Committee (SNCC), at his side, the marchers were stopped as they were leaving Selma, at the end of the Edmund Pettus Bridge, by some 150 Alabama state troopers, sheriff ’s deputies, and possemen, who ordered the demonstrators to disperse.

One minute and five seconds after a two-minute warning was announced, the troops advanced, wielding clubs, bullwhips, and tear gas. John Lewis, who suffered a skull fracture, was one of fifty-eight people treated for injuries at the local hospital. The day is remembered in history as “Bloody Sunday.” Less than one week later, Lewis recounted the attack on the marchers during a Federal hearing at which the demonstrators sought protection for a full-scale march to Montgomery. A transcript of his testimony is presented in the following pages.

Lewis: . . . a State Trooper made announcement on a bullhorn or megaphone, and he said, “This march will not continue.”
[Attorney Peter] Hall: What happened then; did the line stop?
Lewis: The line stopped at that time.
Hall: You stopped still?
Lewis: Yes, sir.
Hall: You didn’t advance any further?
Lewis: We stopped right then.
Hall: Then what happened?
Lewis: He said, “I am Major Cloud, and this is an unlawful assembly. This demonstration will not continue. You have been banned by the Governor. I am going to order you to disperse.”
Hall: What did you then do?
Lewis: Mr. Williams said, “Mr. Major, I would like to have a word, can we have a word?” And he said, “No, I will give you two minutes to leave.” And again Mr. Williams said, “Can I have a word?” He said, “There will be no word.” And about a minute or more Major Cloud ordered the Troopers to advance, and at that time the State Troopers took their position, I guess, and they moved forward with their clubs up over their—near their shoulder, the top part of the body; they came rushing in, knocking us down and pushing us.
Hall: And were you hit at that time?
Lewis: At that time I was hit and knocked down.
Hall: Where were you hit?
Lewis: I was hit on my head right here.
Hall: What were you hit with?
Lewis: I was hit with a billy club, and I saw the State Trooper that hit me.
Hall: How many times were you hit?
Lewis: I was hit twice, once when I was lying down and was attempting to get up.
Hall: Do we understand you to say were hit . . . and then attempted to get up
and were hit—and was hit again.
Lewis: Right. 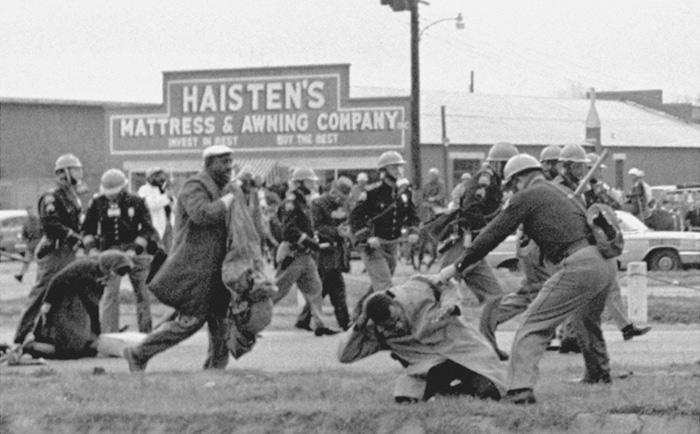 At the end of the hearing, on March 17, Judge Frank Johnson, Jr., ruled that the demonstrators had a constitutional right to march; on March 21, under the protection of a Federalized National Guard, 3,200 demonstrators set out from Selma in a mass demonstration that became a turning point in the civil rights movement.